This site does not support Internet Explorer. Please use a modern browser such as: Chrome, Firefox, Safari (included with Mac OS) or Edge (included with Windows).

Once a specimen has been collected by a phlebotomist, nurse, physician, or other healthcare professional, it is sent to the laboratory for testing. In large hospitals, specimens may be sent directly to the laboratory from the patient care area via a pneumatic tube system, whereas smaller hospitals will have specimens picked up and dropped off by laboratory couriers. Once at the laboratory, specimens are received, sorted, registered, and then marked as “received” in the Laboratory Information System (LIS) before being labeled and processed for testing. This entire check-in process is often referred to as specimen accessioning and processing.

One of the primary responsibilities of specimen accessioning is to catch pre-analytical errors before the specimens are processed for testing. This involves ensuring:

After the specimen passes the accessioning requirements, it is labeled, processed, and routed to the other departments of the laboratory. 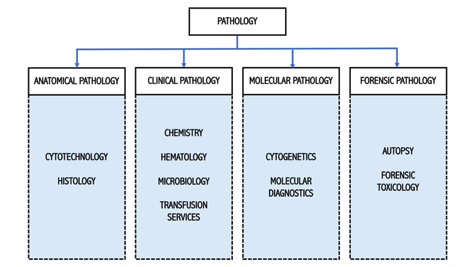 Cytotechnology (also known as cytology) involves the microscopic study of cells to detect cancer and other cellular abnormalities in fluids such as PAP smears, cerebrospinal fluid, urine, and blood. Pathologists and cytotechnologists usually work alongside each other to identify abnormal cells present in fluids.

Histology involves the gross examination and microscopic analysis of tissue specimens. Organs and surgical tissue biopsies are first examined in their entirety (known as “gross” examination) by being weighed, measured, and dissected. The specimens are then either processed, affixed to slides, and stained or sliced and embedded into wax blocks for microscopic analysis. By studying the structure and function of entire tissues and organs, histologists and pathologists can identify cancers and other signs of pathogenesis.

The chemistry department is usually the largest and most automated part of the laboratory. It is sometimes divided into many different subspecialty areas, including automated chemistry, STAT chemistry, immunology, toxicology, endocrinology, and special chemistry. Common tests include the comprehensive metabolic panel, thyroid function studies, lipid panel, hormone and vitamin assays, drug screens, and troponin – a cardiac marker that is used to indicate whether a patient has had a heart attack.

The hematology department is responsible for analyzing a patient’s blood and blood components. By analyzing the number and maturity of red blood cells, white blood cells, and platelets in a whole blood sample, medical scientists can detect diseases such as leukemia and anemia. Hematology also involves coagulation studies and platelet function assays (an area usually referred to as hemostasis) to help detect clotting problems and monitor drug therapies. Urinalysis, sperm counts, and malaria testing are some more examples of testing done in a hematology department.

From bacteria and viruses to fungi and parasites, microbiology is the study of all things tiny. The goal of any clinical microbiology lab is to detect and identify pathogenic microorganisms causing disease in a patient. Various specimens are first cultured onto media using different techniques. The goal of culturing is to isolate pure colonies of bacteria, mold, or fungi that can then be identified using methods such as mass spectrometry or PCR. Once identified, antibiotic susceptibility testing is usually performed to determine the best course of antibiotic therapy for the patient. Other testing in the microbiology lab includes gram staining, ova and parasite tests, STD testing, and rapid tests for strep and other common pathogens.

Immunohematology, also known as “Transfusion Services” or more commonly “Blood Bank”, is the area of the clinical laboratory responsible for providing compatible blood components to patients for transfusion. The blood bank keeps an inventory of red blood cells, plasma, platelets, and cryoprecipitate available for routine blood transfusions, surgeries, and traumas. When a patient needs blood, the blood bank is responsible for determining the patient’s blood type, testing for and identifying any antibodies present, and then providing crossmatch compatible blood components.

In larger laboratories, molecular and genetic testing might be done in a separate branch of pathology known as molecular pathology. Molecular pathologists usually work with medical scientists in two main areas, cytogenetics and molecular diagnostics.

Molecular testing involves testing a sequence of DNA or RNA to identify a specific genetic marker of interest. This could involve testing the patient’s DNA to detect gene variants that cause inherited disease or make them more susceptible to cancers. It can also be used to identify the presence of infectious organisms and antibiotic resistant genes.